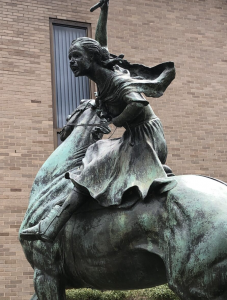 Fun fact: did you know that a 16 year old woman by the name of Sibyl, made an epic nighttime ride on horseback through Connecticut on April 26, 1777 to warn militiamen that the British military was sending troops to root out revolutionaries?

She galloped on horseback for nearly 40 miles to summon the soldiers to help defend Danbury, although they were late in stopping the attack, they were able to harass the departing British troops. What an amazingly brave young woman Sibyl was, and now has a statue in Danbury to commemorate that bravery!